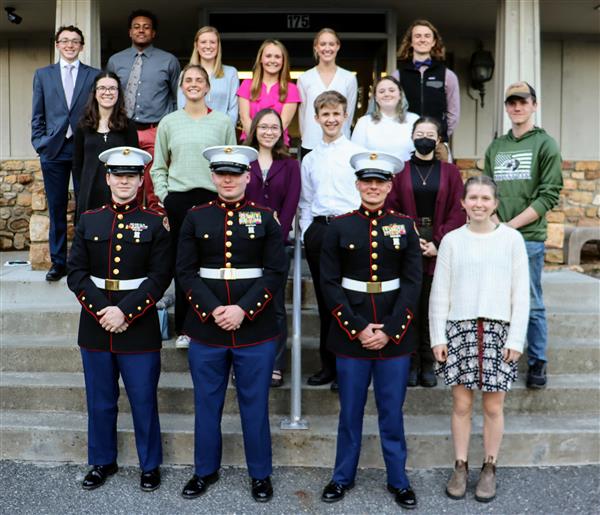 Students from Watauga High School attended the March meeting of the Watauga County Board of Education to share news of a wide range of student-led service projects and volunteer work completed by student clubs and organizations.

Led by the board’s student representatives Isabella Sibaja and Mia Shanely, the presentation highlighted the work of 9 student groups and dozens of student projects that have completed hundreds of volunteer hours around Watauga County this year.

Watauga County Schools Superintendent Scott Elliott said he was proud to have so many students back in attendance at the school board meeting, especially to highlight the worthy charity and volunteer work student clubs had performed this year.

“There is so much incredible work that our students take part in across all of our schools every day, and it would be difficult to highlight it all as much as it deserves,” Elliott said. “These students are leaders in their school and their community, and we are proud of their amazing efforts to help those in need. For each of these projects that we’ll hear about tonight, there are doubtlessly many more that are just as deserving of recognition. It’s a mark of the quality, empathy and work ethic of these young people that they’d dedicate so much time in service to others.”

The board heard from Brelyn Sturgill and Brooke Jones on behalf of Athletes for Good, a service organization of student athletes at WHS. The group highlighted their work over the past year including providing supplies and care packages to teachers across the county. The group has also aided in the Bags of Hope project for OASIS, provided chemo care packages for the hospital, nurse appreciation gifts, and worked for a food drive on behalf of Casting Bread Ministries.

The WHS Interact Club, represented by members Sophie Wampler and Mia Shanely, presented to the board on the club’s work volunteering at Bare Bones Thrift Store for the Watauga Humane Society, cleaning the Greenway and river behind WHS, packing shoeboxes at Operation Christmas Child and holding a fundraiser for OASIS. The group has also worked on projects from chopping firewood to volunteering at the Hospitality House.

The Sustainability Club was represented by Gwendolyn Anderson and Sidra Miller. They shared with the board about the group’s efforts to research, write and coordinate with administration to apply for a solar photovoltaic system that will help power the football concession stand and high school greenhouse at WHS.

Cadets from the WHS Marine Corps JROTC were represented by Axel Albu and Zachary Brooks. The cadets reported their unit conducted a river cleanup that removed 500 pounds of garbage from the Watauga River. The Cadets have also conducted more than twenty color guards for various organizations in the community and have contributed more than 500 hours of community service in other areas including support for local charities and non-profit organizations.

The Watauga Future Fire and EMS Club’s presentation was led by Hailey Harmon. The club is composed of students who wish to go on to careers in emergency management. Harmon said students regularly attend local Volunteer Fire Department meetings and training sessions and are even able to respond to certain calls when possible.

The board heard from WHS Anatomy and Physiology class student Hannah Justice who presented on the group’s effort to operate a used glasses drive in April. The glasses collected can be repurposed and distributed to those in need worldwide.

Isaiah Shirley and Gresham Collins, members of the Watauga High School Basketball Team, informed the board about the team’s Coaches Vs. Cancer basketball game that raised more than $700 for the American Cancer Society. Players collected donations during the games and made posters to hang up in the gym during games recognizing faculty members, family members and people that they know who have been affected by cancer.

The board also heard from Kyle Hollars and Miriam Spaulding from Mountain Alliance. The students reported that Mountain Alliance has completed more than 200 hours of service so far this school year. Students have served at a variety of local organizations/events including Back 2 School Fest, Todd's Table, Valle Country Fair and BUMC Firewood Ministry. Students also participated in a clean-up of the South Fork of the New River on the Greenway in Boone and prepared a meal at WHS that was later brought to the Hospitality House to feed their residents and those in need.