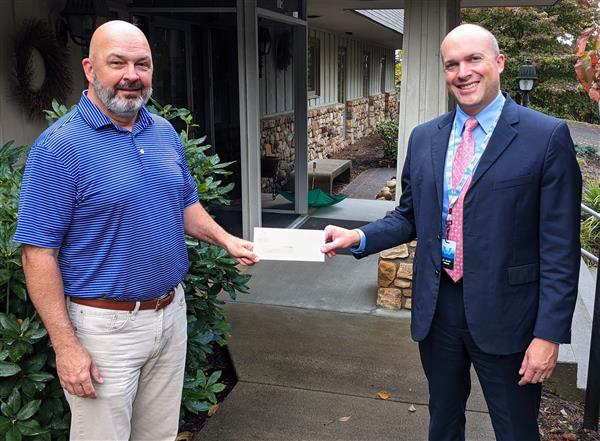 A donation from Skyline/Skybest has been used to jumpstart the inaugural season of play for Watauga County Schools’ new middle school golf team. Made up of 32 golfers from seven different schools, the team is set to finish its season next week after completing six matches.

Skyline/Skybest donated $3,707 that was used to purchase each golfer on the team and shirt and hat as well as golf balls, tees and other equipment. The WCS team has hosted two matches this year at Sugar Mountain and Lenoir Golf, the team was able to provide meals at those matches thanks to the funding.

Edward Hinson, Chief Marketing and Sales Officer for Skyline/Skybest, said supporting local schools was an important part of the co-op’s work in their community.

“An essential component of our cooperative is to help support and meet the needs throughout the communities we serve,” Hinson said. “On behalf of SkyLine, our board of directors, our executive team and our entire membership it is our honor to support your athletic endeavors. We applaud the efforts of Watauga County Schools including the student engagement and education on and off of the field.”

WCS Superintendent Scott Elliott, who accepted the donation on behalf of the school system, said Skyline/Skybest was a longtime supporter of public schools in Watauga County.

“This latest donation represents just a portion of the support we’ve received from Skyline/Skybest over the years. In the recent past, they’ve provided funding for several of our middle school sports programs. These included uniforms for basketball teams, soccer goals, and the start up costs for our middle school baseball and softball programs.” Elliott said.

Watauga County Schools Assistant Superintendent Dr. Stephen Martin, who also acts as the golf team’s coach, said he was grateful to Skyline for their support.

“Skyline/Skybest’s generosity was a tremendous asset to our team this year,” Martin said. “Their support was a huge help to get our Middle School Golf Program up and running and provided supplies and equipment for more than 30 of our golfers. We are so grateful for the incredible support we receive from our community and look forward to carrying middle school golf far into the future. Successful feeder programs in middle school sports also enable our student-athletes to be prepared to compete at the high school level.”