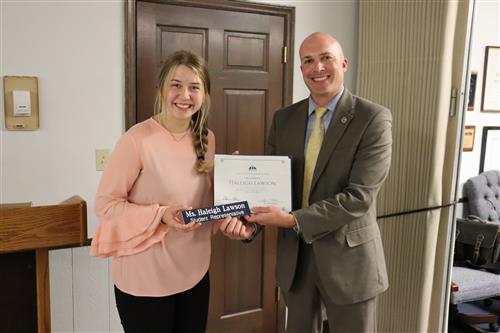 Lawson has served over the past two years as one of two student representatives who sit on the Watauga County Board of Education. Chosen from a pool of applicants after an interview process, the two student board representatives are tasked with connecting students and their interests directly with the board of education.

Elliott said the Servant’s Heart Award is the highest honor presented by the Watauga County Board of Education, and is given to only the most deserving students, employees, and community members in recognition of the highest level of service and leadership.

Elliott said Lawson earned her award through years of dedicated student leadership, both at Watauga High School and Bethel. He said Lawson had served in student leadership in the GEAR UP program at Bethel School, as a Pioneer Ambassador at Watauga High School, had led in the implementation of the Peer Group Connect mentoring program at WHS, and served for two years as a student representative to the board of education.

“During her time as a student representative to the board, Ms. Lawson was highly engaged in board deliberations on policy and funding matters that impact students. Her input into school operation decisions during the COVID-19 pandemic and advocacy to encourage students to make safe and healthy choices during the return to in person instruction were highlights of her positive leadership,” Elliott said.

Elliott said the skills Lawson had demonstrated during her time in Watauga County Schools would serve her well into the future.

“The Servant's Heart Award is a recognition not only of your many accomplishments in the service of your school and community, but of our belief in you and the many ways you will positively impact our world in the future,” Elliott said.