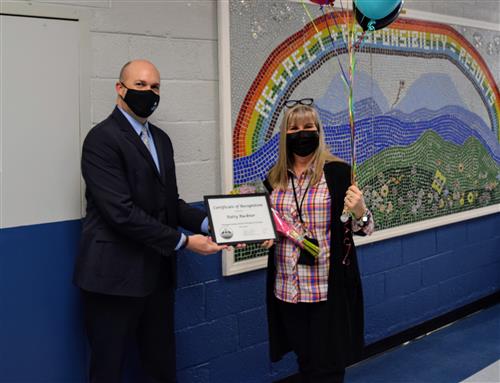 Buckner, who has served as the principal of Parkway since 2017, said she was honored to have been recognized by her fellow principals across Watauga County Schools for the award.

“I’m truly honored to be named Principal of the Year, but getting this award isn’t just about me,” Buckner said. “This is thanks to the assistance and constant support of my teachers, staff and colleagues across the district. I always have somewhere to turn when I need guidance — it’s really a group effort.”

Superintendent Dr. Scott Elliott, who presented the award along with Buckner’s family and members of the Watauga County Schools Central Services team, said Bucker’s leadership was a great asset to Parkway, especially in a particularly challenging year.

“It is always special to be chosen for recognition by your peers — people who understand the challenges and scope of your job better than anyone — but this year, especially, Mrs. Buckner has shown her skill as a leader,” Elliott said. “Her skill and perspective has been a great asset not only to Parkway School, but to her colleagues across all our schools.”

Mrs. Buckner began her career in Watauga County Schools as a teacher’s assistant at Cove Creek School. In her tenure with the district, she has taught first grade at Bethel and Parkway schools and served as an assistant principal at Parkway before taking the principal position.

With her award, Buckner will now be in the running to receive the regional Northwest North Carolina Principal of the Year Award.