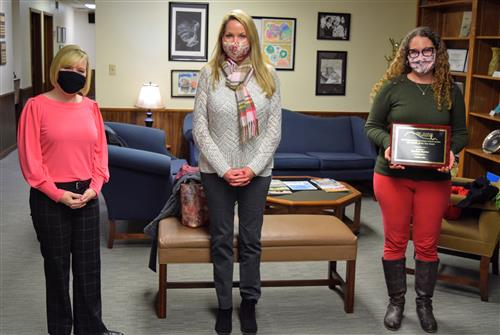 Two Watauga High School foreign language teachers were recognized at the January meeting of the Watauga County Board of Education after being awarded with statewide and national honors for prowess in their area of expertise.

WHS Spanish Teacher, Carmen Scoggins, was awarded with the American Council on Teaching Foriegn Languages Florence Steiner Award for Leadership in Foreign Language Education K- 12. The award is presented yearly to an educator who has demonstrated excellence in the world language classroom and has been a leader at the local, regional, state and national levels.

Scoggins was recognized for her leadership and contributions to teaching foreign language at both Watauga High School and Appalachian State University. She also provides professional development for teachers across the entire United States and has served as president of FLANC (Foreign Language Association of North Carolina) and SCOLT (Southern Conference on Language Teaching).

The board also recognized WHS French Teacher, Heather Tedder, who was recently named the Foreign Language Association of North Carolina Teacher of the Year.

Tedder, who has taught French at WHS since 2007, has greatly expanded the French program at the high school level, single handedly teaching all levels of French, including Advanced Placement, at the school.

Watauga High School Assistant Principal, Susan Mochen, introduced Scoggins and Tedder to the board of education, saying their classrooms were among her favorites to visit in the school. She said Tedder and Scoggins bring an energy to their entire department and are leaders throughout the school.

“If you haven’t had a chance to visit these classrooms, I encourage you to do so when possible,” Mochen said. “Seeing these two amazing ladies teach is an experience that you won’t forget.”

Superintendent Scott Elliott said the two teachers were remarkable leaders both at WHS and beyond.

“Mrs. Scoggins and Mrs. Tedder both are incredibly deserving of these recognitions,” Elliott said. “They are the embodiment of teacher leaders — both in their classrooms, the WHS Foriegn Language Department, and through their work in collaboration with peers in other districts, the state and country at large. We are proud to have them recognized at such high levels and prouder still to have them represent Watauga County Schools.”