Henries and Reese mark end of School Board service 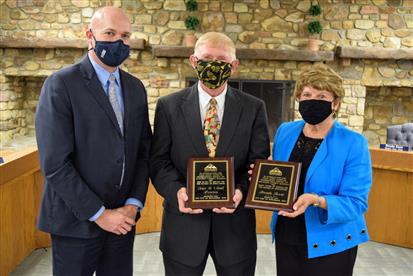 The Watauga County Board of Education saw the departure of two of its longest-serving members on November 9 as the terms of Board Chairman Ron Henries and Vice Chair Brenda Reese came to an end. Both board members chose to not seek reelection after a combined service of almost 20 years on the school board.

Henries, who served ten years on the board, came to public service from a long career in the school system he’d come to represent, beginning his career with Watauga County Schools in 1984.

In his two-decade career, Henries served in various capacities across Watauga County Schools. He worked as an assistant principal at Hardin Park School, and principal at Bethel and Cove Creek Schools, later going on to serve as director of exceptional children’s services at the central office.

Henries obtained his undergraduate and masters degrees from Appalachian State University where he continues to teach.

Superintendent Scott Elliott said Henries was an inspiration to him as a leader and noted the unity and student focused progress made by the board under Henries’ leadership.

“There is no doubt about the positive influence Ron has had our school system for more than four decades,” Elliott said. “His most recent role as the chairman of the school board for the last seven years, the steady and consistent leadership he has provided to all of us, is a large reason for the success we have seen as a school system.”

Reese, who finished her term with 8 years of service on the school board, worked in public education across North Carolina before coming to Watauga County Schools.

Reese began her WCS career as Exception Children’s Services Director before moving to Mabel School as principal. After 15 years in Watauga County Schools, Reese went on to serve as a principal in neighboring Avery County.

Elliott said Reese was a stalwart advocate for children and her leadership had overseen great strides forward in the school system.

“She has been a consistent supporter of our teachers and students. Her professionalism and high expectations for others is matched only by her compassion and support for others. Brenda has been a staunch advocate for our early education initiatives, and worked tirelessly to support our efforts to have a pre-kindergarten classroom at all our elementary schools.”

Elliott said it would be difficult to overstate the profound impact Henries and Reese had on education in Watauga County — both in their careers as principals and directors and as school board members.

“Over my career, I’ve had the privilege to work with many school board members in different roles and capacities,” Elliott said. “Mr. Henries and Mrs. Reese are model school board members in every aspect of their work. Our school system is well known across the state for our high standards, our professionalism, and our pursuit of excellence. That all begins with high expectations and quality leadership at the board level. They’ve left an important legacy in our school system and the positive work they put forward on our board of education will continue to impact children in our county long after their terms have ended.”