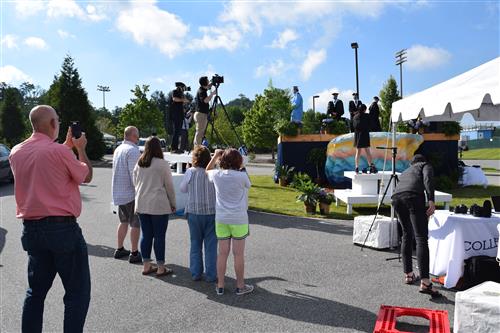 WHS Senior Joshua Cornett crosses the stage and poses for a photo as his family looks on.

Seniors and their families — who attended the ceremony in everything from motorcycles to firetrucks — were routed in a procession around the school grounds that culminated in a stage that seniors were able to cross to receive their diploma while their families took photos and cheered them on.

Due to state-mandated restrictions on large gatherings, staff at Watauga High School had to quickly develop a graduation plan that would allow seniors to cross a stage in front of their families to receive a diploma that was allowable under current restrictions.

Staff settled on a drive-through ceremony after working with public health officials who advised the outdoor option would allow seniors to have the most guests in attendance safely.

“Planning for this year's graduation was a combination of efforts from almost everyone at WHS -- from planning for traffic management to the Watauga Education Foundation stepping in to help us fund a live stream of the event,” Elliott said. “Assistant principal Tierra Stark had the vision for creating the elevated stage where students would be able to walk across the top of the spirit rock as they received their diplomas. The construction teachers build the scaffolding and structure for the stage. The arts teachers created the mural on the rock. Countless staff members assisted with traffic, greeted and directed the families to the stage, and then cheered them on as they left the stage.” 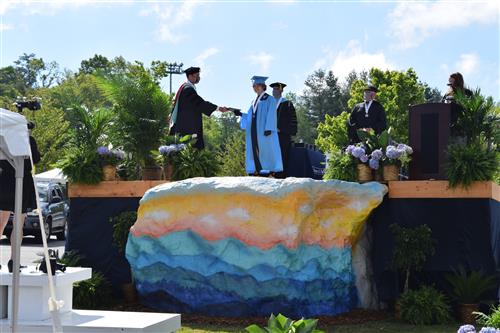 Elliott said the high school was able to hire a team of photographers and videographers to ensure that as many people as possible could see their senior graduate thanks to a donation from the Watauga Education Foundation.

Elliott said the event was live streamed and viewed around the world. A special commemorative video with the student speeches, music, and the diploma ceremony will be available later in the week.

Watauga High School’s 2020 graduation also had tremendous support from the community, local businesses and the Boone Chamber of Commerce. AppHealthCare Director Jennifer Greene and Watauga County Director of Emergency Services Will Holt assisted in reviewing the graduation plans and offering helpful advice on how to ensure that the event was as safe and healthy as possible.

Elliott said parents and students were gracious and flexible in the unprecedented event.

“The response from all the families and seniors who attended graduation was very positive,” Elliott said. “Since the start of the pandemic, grace and flexibility has been our constant refrain, and our graduation ceremony really showed that our community has a great deal of both. While we wished nothing more than to be able to give our seniors the commencement they expected, it was an honor to be able to work with so many people to develop a creative solution to ensure that families could watch their senior cross the stage and receive a diploma.”

A gallery of photos from graduation may be viewed at https://bit.ly/302RlUa 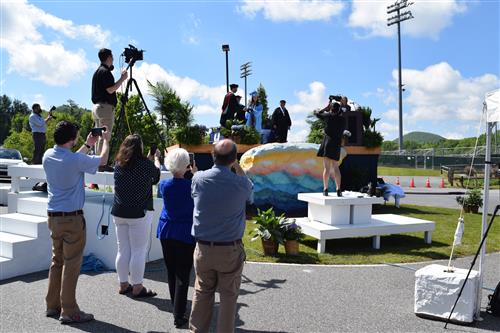 Carey Dowell picks up her diploma while family takes photos.