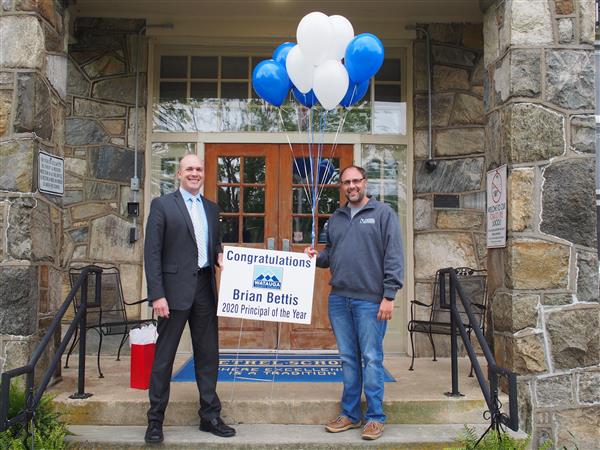 Bettis, who has served as the principal of Bethel School for three years, said he was honored to have been selected by his fellow WCS Principals as principal of the year.

“It is such an honor to be recognized among my peers for this award,” Bettis said. “I have the opportunity to work with and learn from an amazing team of principals and district-level administrators who are dedicated to serving the students and families of Watauga County.”

Bettis also thanked his colleagues and students at Bethel.

“I am blessed to work with the students, families, and staff of Bethel School and am so proud of the great things that are happening in our school and district,” Bettis said. “I love my job because of the students that I get to work with each day and am humbled by the opportunity that I have to make an impact on their lives.”

Superintendent Dr. Scott Elliott, who presented Bettis with the award along with colleagues from Bethel and several representatives from Watauga County Schools central office, commended Bettis for his exceptional work at the school.

“Mr. Bettis has been an incredible leader for Bethel School in the three years since he came here as principal,” Elliott said. “He has been well received and supported by the community and is highly respected by his staff.”

Elliott said the award was made all the more special by Bettis’ history at Bethel School.

“Bethel is a very special school and community for Mr. Bettis,” Elliott said. “He started his career there as a student teacher while he was at Appalachian State University. Mr. Bettis is widely respected by the other principals in our district. I believe they selected him for this award because of his deep commitment to Bethel School and its tremendous growth under his leadership.”

Before coming to Watauga County Schools, Bettis was an Elementary Teacher with Cleveland County Schools where he served in various capacities and leadership roles. Bettis is currently a member of the Association of Supervision and Curriculum Development, North Carolina Council of Teachers of Mathematics, National Council of Teachers of Mathematics, and the North Carolina Principals and Assistant Principals Association. Bettis is also a Math Foundations Trainer.

With his award, Bettis will now be in the running to receive the regional Northwest North Carolina Principal of the Year Award.