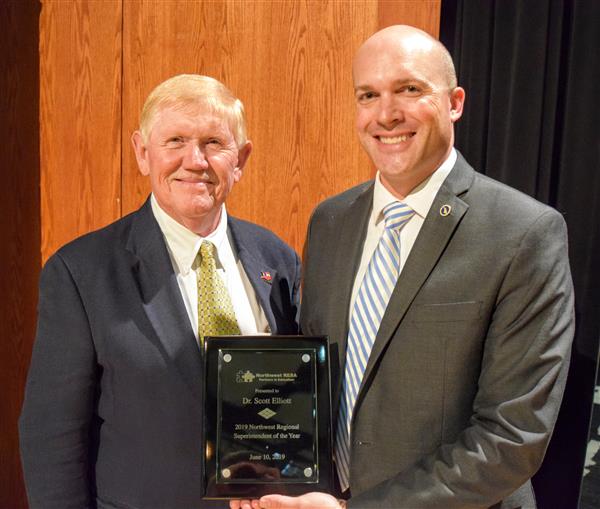 Elliott poses with School Board Chairman Ron Henries at June's Board of Education Meeting.

The Regional Superintendent of the Year Award winner is chosen by fellow superintendents from the 12 school districts in Northwest North Carolina. Award winners from each of the eight regions are eligible to go on to win statewide recognition for their work.

NWRESA Executive Director Don Martin said Elliott was chosen for the award for his dedication to public education and commitment to Watauga County Schools.

“Elliott was selected by his peer superintendents for this award because they recognize his hard work and leadership both in Watauga and the state and regional levels,” Martin said. “He is well known and highly respected across our state as a vocal champion for both Watauga County Schools and for public education.”

Watauga County Board of Education Chairman Ron Henries said Elliott’s compassion and continual advocacy had been a credit to Watauga County Schools.

“It would be very difficult for me to detail all the things Dr. Elliott brings to Watauga because he is talented in so many areas,” Henries said. “I think what impresses me most is his ability to communicate with so many different groups. Whether he is driving a bus for a field trip with students, supporting teachers in the classroom, helping a parent with a problem, or working with community leaders to advocate for our schools, Dr. Elliott has a passion for helping people that is understood and appreciated by everyone. He believes very deeply in what he does and it shows.”

Elliott thanked NWRESA for the recognition, crediting his colleagues across Watauga County Schools for their hard work.

“I am honored and humbled to accept this award, but not for a minute do I think this is about me. It is a recognition of the quality and reputation of Watauga County Schools as a whole,” Elliott said. “It is an absolute privilege to serve in this county with these teachers, staff and students who prove everyday they’ve earned the high reputation they have across our entire state. Together, we set the ambitious goal to be the best place to learn and work in North Carolina. To serve this community and these schools is an honor and a blessing for me both personally and professionally.”

A native of Marion, Elliott is in his fifth year with Watauga County Schools. His wife, Laura, is a middle school science teacher at Parkway School where their children also attend. Before coming to Watauga, he served as a teacher, assistant principal, principal, central office director and assistant superintendent in Transylvania County Schools in Brevard where he was recognized as that district’s teacher of the year. Elliott was a community college instructor in a maximum security prison and in a youth residential job training program before transitioning to K-12 education.

Outside of education, Elliott is also actively involved in various groups across the High Country. He serves on boards with the Watauga Public Library, Watauga Housing Trust, Boone Area Sports Commission, and High Country United Way. He is actively involved with the Reich College of Education at Appalachian State University, serving on the ASU Public School Partnership Governing Board and the RCOE Advancement Board. He is a member of the Blue Ridge Energy Community Leaders Council and was recently appointed chair-elect of the Boone Area Chamber of Commerce.