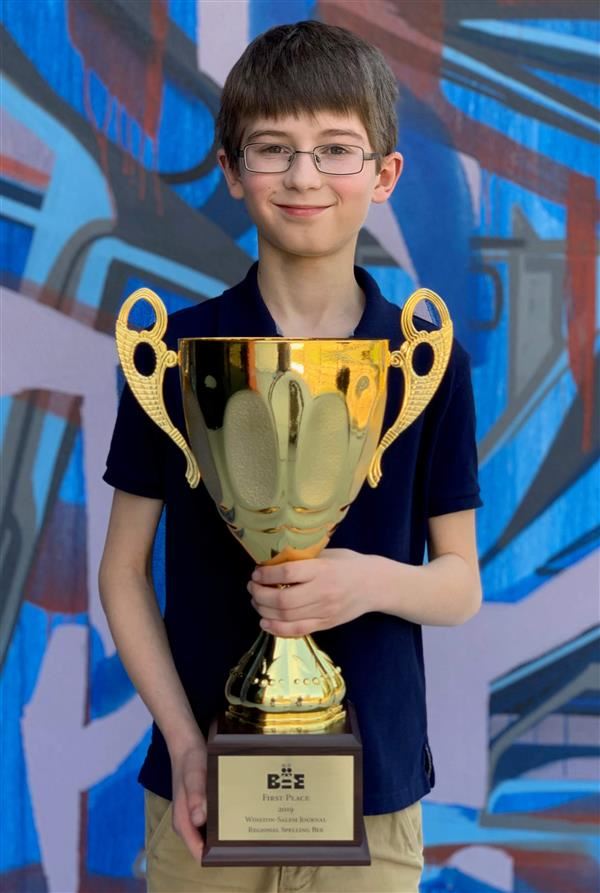 Sam Nystrom poses with his trophy after winning the regional spelling bee in Winston-Salem.

The contest pitted Sam against third through eighth grade competitors from 17 nearby counties. He bested 27 spellers over 11 rounds, correctly spelling the word “tilth” to secure his victory.

Sam is no stranger to the regional spelling bee. He made his first trip to Winston-Salem two years ago as a fourth-grader. It wasn’t until a nine-year-old Sam found himself competing against some the the state’s best spellers that he realized he might have a knack for the craft.

“Well in 4th grade, I just did my best, and that got me all the way to regionals, so I thought whoa, I’m good at this, I should put more effort into it,” Nystrom said.

Over the next two years, Sam did just that. With the help of his mother, Jennifer, Sam spends time each night studying wordlists. When he encounters a word he doesn't know, he highlights it for later study.

But Sam said that list of unknown words is dwindling.

With more experience under his belt, Sam said he felt much more prepared for his most recent bee. His nightly study routine has helped him identify spelling trends in words by their language of origin.

“Some languages like Japanese and Spanish have very set spelling rules,” Sam said, “but Latin, Greek and Old English have a lot more variety.”

Sam said words with their roots in Spanish were becoming particularly easy for him, as he’s taken to studying the language at home in his spare time — a big help for spelling career.

Sam’s mother Jennifer said his spelling success had reading to thank just as much as study.

“I credit his win more to his love of reading than anything — he’s really a voracious reader,” Jennifer said. “All the words in the last half of the regional bee were not ones he’d studied. He really knew about half of them — the other half he was able to guess because he’s so well-read.

“I am very proud of him and I really respect his composure. I think if I were up on stage like he’s been I’d fall apart with nerves, but he’s always very composed and I’m very impressed by that.”

With a victory at the regional bee under his belt, Sam will now go on to compete in the Scripps National Spelling Bee held in Gaylord National Resort and Convention Center in National Harbor, Maryland the last week in May.

Sam said he was very excited to compete at the national level, but the elevated competition would require even more study on his part.

Northwest North Carolina’s best speller and his family expect to receive the national bee wordlist and get started studying soon.