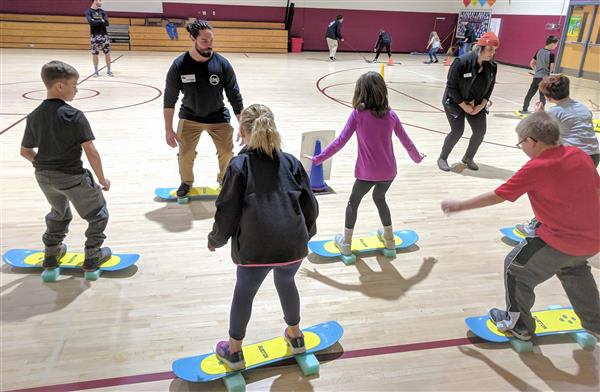 Eli Ward, Bailey Norris, Addilou Tobbiasen, Kable Presnell and Conner Helms get their first lesson in standing on a snowboard

from Thalia Villarosa of Beech Mountain Resort and Shawn Mitchell from Edge of World.

Watauga County Schools was lucky last week to end up in the middle of a bout of mid-winter warm weather, but that didn’t stop students at Cove Creek School from taking to the slopes as part of their physical education classes with the help of Beech Mountain Resort and Edge of the World Snowboard Shop.

Students learned to get the feel of a downhill slope as they were towed around the gym on boards pulled by volunteers from Edge of the World. Others worked on their balance and posture on a host of training tools the two companies brought down the mountain to prepare the students for a day at the slopes.

Kelly Walker, Principal of Cove Creek, said the visit was an excellent opportunity for her students to learn about a recreation that was a such a big part of our community.

"We are happy to partner with Beech Mountain and Edge of the World to bring this opportunity to our students," Walker said. "We’re so fortunate to live in an area where skiing and snowboarding is available to our kids, so it's a great chance for our students to get a better understanding of what's involved in those sports as part of their physical education."

The visit was spearheaded by Beech Mountain Resort Marketing Director Talia Freeman — a former student at Cove Creek. Freeman said learning the basics of snowboarding in a gym was a great way for younger kids to be introduced to the sport.

“I am a native of Watauga County, so I think it is especially important to introduce children to the sport and a thriving industry in our area,” Freeman said. “This program is a great way to showcase snow sports in a safe and fun learning environment. I went to Cove Creek and Coach Vannoy was my coach, so it was very special for me to go back and showcase snowboarding.” 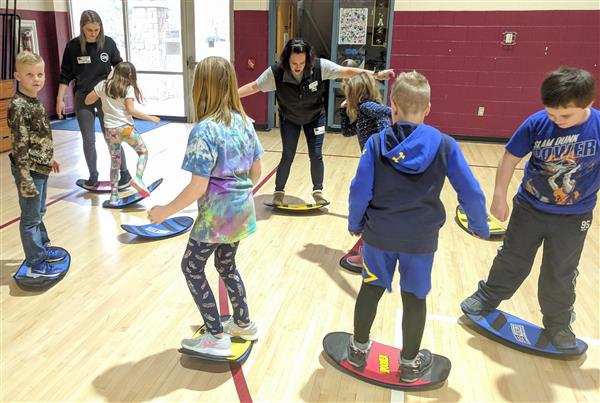 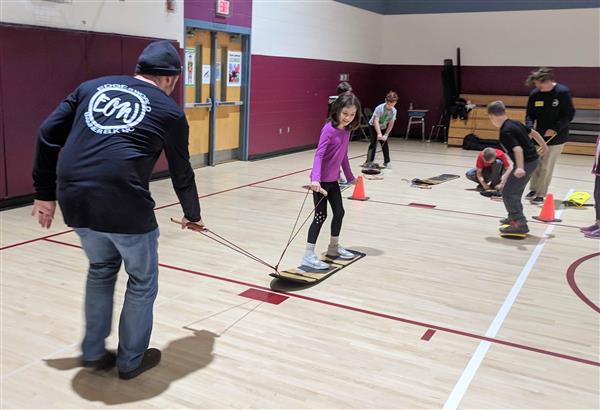 Jeff Johnson from Edge of the World Snowboard Shop gives Cove Creek third-grader Addilou Tobbiasen a tow around the gym.